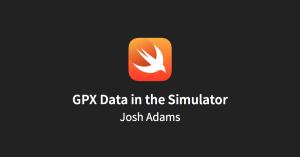 GPX Data in the Simulator

Debugging GPS-based apps can be troublesome, especially given the unrealistic dataset provided in Simulator. Fortunately, Josh Adams has created a handy tool, GpxLocationManager, to streamline GPS debugging. Josh walks us through how to extract quality location data for debugging, and how to test it using GpxLocationManager.

This talk will cover ways to make developing GPS-based apps easier. For those who have used apps like Uber or any run-tracking app, you may have noticed that functionality these apps share is that they’re able to show your location in space, often on a map. They do this using the Global Position System (GPS) sensor built into every iPhone.

The way a programmer accesses GPS data is via a class called CLLocationManager. Basically, the programmer hands CLLocationManager a delegate, which, if you activate the class, will send location data in the form of CLLocation structs to the app as the user moves around.

The CLLocation conveys four points of data: latitude, longitude, elevation, and a time stamp. The time stamp matters because for the purposes of a route, when the user was at each point in space is important.

I have been developing a run tracking app for myself. I noticed that when I just use the GPS sensor in the iPhone, it hard to debug. (I’m not usually running while programming!) Instead, I tried to use the GPS data that’s built into the simulator. There are four sets of pre-baked data to choose from, all sourced from locations around the Apple campus: “Apple”, “City Bicycle Ride”, “City Run”, and “Freeway Drive”.

The first problem I noticed with this built-in data is that there are four sets of it. If I get sick of testing my app around Cupertino, there was nothing I could do about it.

Another problem is that the runner moves very slowly. It’s actually to scale, but if I wanted to have the runner go a mile in my development test cycle, that would take around eight minutes at the default pace. It’s very slow.

The third and final problem I saw was that the elevation data during this Apple campus run was perfectly level, resting at zero elevation. I don’t think Cupertino is at zero elevation – it’d probably be a little bit damper if it were! It turns out this built-in data always gives an elevation of zero feet, and it never ever changes. That was a problem for my app because runners care about elevation increases and decreases, but there’s no way to test that functionality with the built-in data.

I wanted a different way to feed GPS data to an app as I was developing it, so I developed GpxLocationManager. I recalled there’s something called a GPX file, which is basically an XML format for location data. I got a GPX file from the run tracking app I use called iSmoothrun, but a lot of GPS-based apps will export similar XML files.

I used some XML data generated from a run around my house. I also implemented a kind of replacement for CLLocationManager that can take any GPX file and use that as data. With that, I can test data for a runner somewhere other than Cupertino, like Berkeley Hills.

With this, I’ve also addressed another problem with the built-in data; I designed GpxLocationManager to allow speed-ups by an arbitrary amount. The user can speed up up to ten times. GpxLocationManager also respects elevation data. In the example available on GitHub, I show a run around my house, complete with elevation increases and decreases.

Here’s the location of the repository and sample app. Thank you!

Josh Adams is a freelance iOS developer based in Berkeley, California. His passion for software development has continued unabated since he taught himself BASIC on an Atari 800 XL way back in the 80s. An iOS app he created, Immigration, is available in the App Store, and he is refining the run-tracking app demonstrated during this talk. Josh is currently developing an iOS app with Exygy and is always looking for new challenges and opportunities in the iOS field.