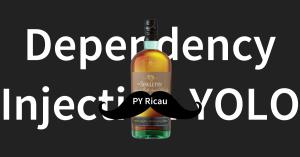 We’ve heard a thousand times why Dependency Injection is good. We know how to use it: put an @Inject here, an @Singleton there, and now we’re DI knights! But when the bits hit the fan, may the force be with us: we have no idea how these black magic libraries work. We move annotations around, rebuild, restart, revert, and finally tweet to Jake Wharton. DIY: let’s build our own DI lib in 5 minutes, and iterate on it to rebuild key features of Guice and Dagger. No more black magic, not even advanced science. It turns out, anyone can write their own DI lib.

Understanding What’s Beneath the Hood of Dependency Injection (1:40)

The goal is to understand what’s going on underneath the hood. So we have a class that has a visit handler, it has a counter that can be incremented, and a logger. We now write a Java program that will use this:

This isn’t very interesting, but we’re looking at the pattern of dependency injection. Writing all that code which is pretty simple here can be very complex in a big app. What’s even harder is that the order in which you need to create things is not always clear. Dependency injection libraries solve that for you, and we do that by creating an object graph.

Let’s look at how we could implement that. All we need to actually make object graph work is two classes. We need a factory interface and we need a linker. The factory is the thing that can create instances for a given key. And the linker is essentially a map of factories. It associates each key with a factory.

How is the object graph actually implemented? It has a linker. You pass it the key, and you ask the factory for an instance of the object.

Coming back to the main, we build the object graph, which means we create a linker, install a bunch of factories on it and then we create an object graph from it.

Now on to the meat of the configuration:

It then calls print stream factory that gets and creates a linker from it. What’s going on is whenever you try to create a logger instance, it’s going to call the method, and this is going to call into the linker, which creates the factory for the print stream. So just by creating this binding, this configuration, everything is going to work like magic.

We have a counter instance, and we want to share that counter across the application because we don’t want to have five counters. We wrap the factory into a singleton factory. All it’s doing is caching the call to get after the first time.

It’s very simple, and not we have a singleton factory. We can see that all it’s doing is when you get, it says “Oh, do I have an instance? No, okay I’m going to call the real factory.”

We’re going to get two different instances if we ask for two instances of this visit handler, which is a lot of work. But there is a way we can cache the work so we don’t have to do it twice.

We had this factory interface which takes a linker, asks for all the dependencies and then returns an instance. What we can actually do is split that in two methods. One is going to be link and it’s when you retrieve the factories for the dependencies. And the other one’s going to be get when you actually create instances.

So a linked factory is a factory that has its dependencies satisfied.

How do we reduce boiler plate? It can be done where we load the factories, so we have the list of linked factories.

Here’s where we introduce the magical annotation @inject, which just adds metadata to the class, to the constructors more specifically. It identifies a specific constructor. If we go back to the code, the load factory, I can look at it at runtime using reflection. I can try to find this @inject constructor on the key class, and if I find it I can create a reflective factory. I can look for @singleton annotations on the class and then wrap the factory in a singleton factory. How do you find an @inject constructor? Well you just get all the constructors and look for the one that’s annotated with @inject.

Ask for the factory for each parameter of the constructors. So all you need to do is call them in order and then pass, create an area of the arguments and pass it to the constructors here.

So with that, this is our new configuration. The only thing left is to bind PrintStream to System.out so there’s no annotation involved here. This is basically Google Guice. There’s a lot more to Google Guice, but this is the same basic way that it works.

The problem is with this, as we saw in the reflective factory is using reflection to detect the dependencies and also to create instances. So if we look at how we originally installed the manual factories, with anonymous classes. This anonymous class here could become a real class that we’re going to generate at compile time. And it’s exactly the same code except we’re going to generate it.

All you need to do is you have the key, which is the name of the class you’re looking for and append $$factory. The one which is the one we generated. We look for that class. We wrap it into a singleton factory if it’s a singleton and then we return it. Which means all we need to change in load factory is to look for the generated factory by reflection.

Why is it not Dagger 1? There are a few bits missing.

Let’s look at another example. Suppose I have a database manager which needs a database. So I come back to my main and ask the object graph, “Give me my database manager.” But when I try to run this code it’s not happy - it’s saying “Oh no, I can’t find a factory for database. The database is not annotated with anything. I don’t know what to do with it.”

So let’s imagine that we had a validate method on the object of operate where we say, “Hey, I actually don’t want an instance but I want to make sure that this will work when I ask for it, and otherwise please throw an exception.” All we need to do to validate is ask for the factory of that key.

If I don’t want the singleton anymore, I want to recycle it.

It turns out most of the time you actually don’t want two object graphs. You want a hierarchy of object graphs. And as soon as you leave that part of the app, you de-reference the object graph and then all of the instances get garbage collected. We need to update our vocabulary because the things that are in here are not singletons anymore - they are scoped instances, meaning a singleton is supposed to be only one instance ever. But here, if we destroy this object graph, and then create a new one and create a new transaction handler, we actually have two instances of transaction handler. So scoped instances is the new singleton.

But if we look at how we implemented linker, our linker doesn’t actually have the ability to say “No, I can’t provide that.” It just tries to load the instance, and that’s not great because we want some singletons to be in the leaf instances and some of them to be in the root instances.

To do this, at compile time we actually have access to all the information, because we have these entry points, the things are on @moduleinjecticle.

We have these entry points, and we can go through all the dependencies. Which means we know exactly in which module/scope an object is supposed to live. So when we create a sub scope, a sub object graph, we’re actually going to go through the list of injects for the parent of the graph and we’re going to try to load the factory for each of them, which means they’re going to be cached in the link factories. And then we prevent the linked factories from ever being updated again. This means when a child asks for something that the parent has never seen before, the parent is not going to try to load it.

We got rid of the linker. We generate the right factory phrase. And then we need one central place where we are going to assemble everything together and generate the code that is going to be responsible for creating the logger factory, creating the print stream factory. So this was our module before. If you remember at runtime we have a bunch of modules and we passed the modules in the constructor of the object graph, and we created the object graph from that. So instead of doing that, we’re actually going to replace the object graph with a class that’s going to be generated at compile time. And that’s a component.

What’s interesting here is how you implement MainComponent. This is all generated at compile time again. Dagger main component is a generated class that’s going to implement MainComponent. When we create it, what we actually do is we create an instance of the module. Then we can create a printStreamFactory that delegates to the provider method of the module. So now we have a field that’s printStreamFactory. The we can send the logger factory field to the generated logger factory class, and just have it reference to printStreamFactory which is also filled in this class. Same thing for the database manager factory. And lastly, you can see that when we want to get a database manager instance, we just call the factory.

So all of this is pretty much what the Dagger 2 generates in terms of code. Which means we got rid of the linker, we got rid of the object graph, and everything is much faster. And there is no linking anymore. It’s basically when the component is created, all the factories are created with the right dependencies immediately.

You should absolutely. The way we ignore that problem is by doing all the injection on the main thread. So anytime we require an instance from the object graph, it’s always on the main thread for us on Android. If you’re doing server work, it might be a little bit more tricky. In Dagger 1.0 the generated code for singletons is thread-safe, meaning if two threads try to get a singleton instance at the same time it’s going to do the right thing: The first one that hits it is going to cache it, and the second one that hits it is going to reach into the cache. So that is thread-safe.

Pierre-Yves Ricau is an Android Baker at Square, working on the Square Register. He formerly worked at Siine in Barcelona. He also enjoys good wine and low entropy code.