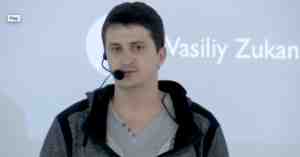 Applications architecture was neglected by official guidelines for Android for a very long time. In spite of that, interest in architecture among members of Android community has been growing steadily over the years.

In this session Vasiliy Zukanov helps us understand what software architecture is and what it isn’t, and discuss several potential pitfalls associated with Android Architecture Components.

My name is Vasiliy, and I work as an independent software consultant and freelance developer. I’m here to talk about architecture components and show you ways in which those components might harm your architecture.

This led to the emergence of several approaches to application architecture. One is architect everything - this was very popular in the 90s and early 2000s. The other extreme is to leave no time for architecture at all. Another approach is to architect some things.

The first two approaches are not good because they are extreme. We probably want to have is something. Architecting something in our applications and not over-architecting and not under-architecting. But how do we define this something? How do we find what we need to architect?

Architecture in Relation to Change

Architecture is our attempt to manage risks involved in changing requirements. As with any other risk-management activity, we cannot be prepared for all the possible risk that can come into play. We need to choose a subset of possible future changes that we are optimizing our application for, and this subset will constitute the application architecture.

In most cases, however, libraries should not become part of an application’s architecture.

In order to understand what LiveData is we need to get back to our usual and standard, Observer design pattern.

We have three blank entities in the Observer design pattern. Client, which is interested in some events that happened in the Observable; and the Observer interface, which Client implements.

The Client registers itself with the Observable, and the Observable notifies the Client through this interface when the events, that the Client was interested in, happen. This is probably one of the most used design patterns in the world.

The Observable then pushes data changes into the LiveData and the LiveData is the one responsible for notifying the Client.

If we use LiveData instead of regular Observer interface, Observer pattern, we will write less code. When we want to get just data from the Observable:

This scheme lowers the risk of memory leaks. LiveData will take care of unregistering itself when the Observer dies, it comes at a cost: the scheme becomes much more complicated in regards to the Lifecycle itself.

LiveData will release us from understanding and handle Lifecycle of activities and fragments. However, in practice, I would argue that it does not achieve that and only complicates the matter. For example, if you look at the interface, at the API of LiveData, you will notice that it has several methods for registration. One method takes LifecycleOwner as a parameter and the other method, ObserveForever, takes no LifecycleOwner as a parameter.

LiveData sits at the interface of your Observable. If you want to refactor it to the usual Observer design pattern, you will need to change your tests and refactor the codebase, and take care of bugs that slipped in between.

ViewModel has nothing in common with MVVM architectural pattern. It is misleadingly named and does not describe its real intent: a ViewModel is kept upon configuration change, so it is an Object, which is logically scoped to activity and fragment.

This is how Android developers handled configuration changes before ViewModel:

ViewModel configuration change had been handled by saving and restoring the state, and ViewModel is a simpler solution. ViewModel comes as an additional a solution to the previous mechanism, as opposed to a replacement.

That resulting percentage is the fraction of application that needs to take care of rotation for you as a user.

Optimizing for rotation is generally a waste of time, and I will wait for some analytics from my users to decide if this is necessary.

ViewModel allows us to handle configuration change more easily. But the disadvantage is the additional effort and the increased chance of getting a save and restore bug.

Android architecture Components are not architecture components. They are design components at best. If you use them, you may increase the complexity of your codebase, for a questionable gain.

There’s really no evident reason to use them. In my opinion, they address the almost non-existent problem. And surprisingly, if you use them, they will make your future changes that you might want to make in response to future requirements changes, they will make these changes harder.

Lastly, this is my blog if you want to read some additional interesting and, in many cases, controversial ideas, including a related post on Android Architecture Components.