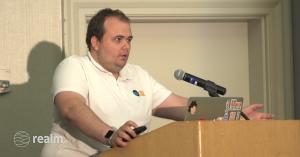 An App for a Presidential Election

From Sept. 2016 to June 2017, the face of the world has/will change(d). The United States has elected Donald Trump, French people chose their next president, Emmanuel Macron, on April 27 and May 7, and so will Germany in September. Since last August, Clément has engaged himself in politics, here, in France (whatever the political party, be sure it’s not a populist one) locally in his department heading the digital and tech stuff, and nationally, developing the official iOS app for the Macron movement. During this 45 min talk, he’ll describe the process we set up in order to reach as many people as possible: young, old, men, women thought A/B testing, reporting and we’ll discuss the result and how, afterwards we could have increase it’s potential. It’s not a technical talk, the app itself isn’t “complicated” but we’ve seen a huge engagement around it, and nowadays, you won election on the street, like 40 years before, but also on iPhones, and social networks.

Engaged in iOS development since iPhone OS ß, Clement has been in the start-up world since 2008 and is CTO of Les Tontons Livreurs, an exciting on-demand moving service company in France & the EU with a new app just launched. He is also a time-to-time speaker & angel investor.