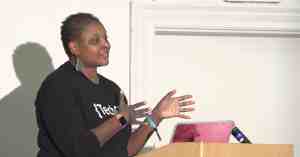 Is it Too Late to Learn How to Program?

Alicia discusses how and why she wanted to be an iOS mobile developer at the age of 51: How a 16-year-old inspired her to learn to code; the challenges she faced after becoming an iOS developer; becoming the first self-taught African American woman mobile developer to create a domestic violence app dedicated to helping victims escape abuse; and how how Apple found her and highlight her in the WWDC 2015 and 2016 keynotes. Some people want to believe that people her age are out of touch with technology, and as a woman hearing that said, she feels that we, the tech community, need to change how we support each other.

Alicia is the first woman of color mobile developer to create a domestic violence app (PEOV) dedicated to helping victims escape abuse. She used her acquired skills as a developer to make a difference. Alicia is also Director of Women Who Code Atlanta she dedicated to empowering women in tech with Women Who Code, she has receive major acknowledgment from Apple at WWDC15 and WWDC16 you could find her on the Apple new beginnings video.