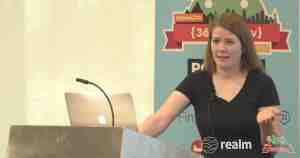 When a cool new feature is released on Android, it usually isn’t backwards compatible, but Google’s suite of support libraries allow you to implement a wide range of newer features on older devices. The libraries are ever changing, and it can be difficult to keep up with new features, and changes to older features.

In this talk we’ll take a look at the libraries available to you, and some of the more powerful components you can use from them. We’ll also take a dive into important feature updates which are commonly missed, with examples on how to update your app. Leverage the support libraries wisely, and have a modern and efficient app, even on older devices!

Kelly Shuster is an Android Developer at Ibotta and a Google Developer Expert for Android. She holds a B.S. in Electrical & Computer Engineering, and worked as an embedded firmware engineer prior to her career in mobile development. Kelly is currently the director of Women Who Code Denver, and enjoys sharing technical knowledge wherever she goes, from local meetups to international conferences. When not programing, she can be found playing in the Rocky Mountains.