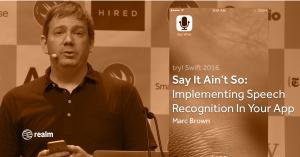 Say It Ain't So: Implementing Speech Recognition in Your App

SiriKit was one of the more talked about features announced at WWDC this year; unfortunately, its initial implementation is limited to a small number of use cases. But all is not lost! Apple introduced a collection of general purpose Speech APIs in iOS 10 that provide simple speech-to-text conversion from streaming voice or audio files in over 50 languages. In this talk from try! Swift, Marc Brown walks you through the new Speech APIs, discusses their limitations, and delivers a practical use case by adding speech recognition to a text-based search app.

I manage the mobile team at Blue Apron. Our mission is to make incredible home cooking accessible to everyone, and our mobile team is doing that in a 100% Swift code base. I also organize a Brooklyn Swift Developers meetup. Today, I am going to be talking about implementing speech recognition in your app.

Fast forward to WWDC this year - Apple finally opens up Siri to third party developers (something that we have wanted for a number of years).

In order to grasp the potential impact of this, let’s pretend that you work for the hot new start up: Weezer Pay. This allows you to send and receive payments with the band members of Weezer. It is a niche market, but highly underserved. If you added Siri kit support, you could say something like, “Hey Siri, send Rivers Cuomo five dollars on Weezer Pay for recording the Blue Album”. Siri kit will then deconstruct that. It can determine the domain is “payments” and that the intent is to actually send a payment. From there, it figures out that you want to use the Weezer Pay app, so it digs into more payment-specific details (e.g. the actual payee, the amount you want to send, and the reason you want to send it).

This is great, except for the list of initially supported domains. This is great if you work for Slack, Uber, or even Weezer Pay, but not so great for others.

However, all is not lost, because at WWDC they also introduced a collection of speech APIs.

Speech Framework is the same speech tech used in Siri. You can use live audio from a live stream for your microphone, or pull in a prerecorded file from disk. Not only does it return the recommended transcription, but it also returns an array of alternative transcriptions, as well as their associated confidence values. It supports 50+ languages and dialects.

Next step, import Speech. This is where you get all the fun APIs.

The speech recognizer allows you to define the context of the query by setting the Locale. You can set a specific language (e.g. US English), or you could even use the user’s current locale.

If you are wondering whether or not the speech APIs will support these different locales, you are probably covered: we are talking 58 total locales. This is great because it allows you to connect with your users in their language.

The recognitionRequest defines your audio source.

There’s a difference between live and prerecorded speech here. Use SFSpeechAudioBufferRecognitionRequest() if you are doing a live stream. If you want to reference a file on disk, use SFSpeechURLRecognitionRequest(). Make sure to set shouldReportPartialResults to true if you want to display the query during processing. This is helpful when the user is saying a long sentence and you want to show immediate feedback.

Here, we display the results back to the user. Apple sets a 60 sec limit to an individual speech request, so if you happen to reach that threshold, it is going to return isFinal as true.

Use AVAudioSession to initialize your audio:

This is another thing you do only when you are ready for input, because it will interrupt most of the audio streams on the device. There are certain audio streams that have higher priority (e.g. making a phone call).

The AVAudioEngine manages the state of your audioEngine. This is where you define your output format, install your audio tap, and kick off the whole thing. When you are ready to go and everything is initialized, call audioEngine.start.

I also wanted to bring up SFSpeechRecognizerDelegate:

There is only one method to use, which is availabilityDidChange. If you are processing a request, and you go offline for some reason, the server stops responding. You will get a change in your availability, and then you can respond appropriately.

I recommend watching the speech recognition video from WWDC - it is very short (12 minutes!), by Henry Mason. I pulled much of my information from there. And then the sample app, Speech Recognition Demo; feel free to play around with it!

Marc is the Mobile Engineering Manager at Blue Apron and has been building iOS apps since 2009. Previously, he worked for Etsy and a handful of startups. Marc runs the Brooklyn Swift Meetup and loves encouraging others to learn Swift. In his spare time, he enjoys retweeting Arrested Development quotes.