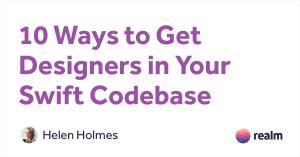 10 Ways to Get Designers in Your Swift Codebase

Getting designers working closely with developers has many benefits. In this talk from try! Swift, Helen Holmes shows how to get designers into your code base by explaining the engineering architectural decisions you can make to make your app designs improve exponentially.

When I started planning this talk, I wanted to call it: “10 things you can do in Xcode without code”. But, why would a room full of intelligent iOS engineers want to do things without code? Instead, the talk I want to give is: 10 ways to get designers into your Swift codebase.

My name is Helen, and I am a designer, I work at Mozilla Firefox. I am part of the developer tools team, I help design tools that web developers use up to eight hours a day, almost every day. I am fairly new to the team and that is evident when you look at the tools themselves. This is unfortunate because there are many awesome projects in the world that suffer from a similar affliction. That is to say: they can benefit from having a designer. But it would need to be a designer who understood code in order to even get started. It is a hard problem to solve, because big codebases can be scary.

Firefox, for example, takes much setup time, an hour and a half build and getting used to a complex bug tracking system to even get started. Even if our codebase is not scary, code can be scary, even programs can be scary. All of you are used to Xcode, and Xcode does not look scary to you any more. But maybe After Effects does, or Photoshop, or even Microsoft Word does. When developer tools started, they did not have a designer.

Because of this, the tools were ugly. Sometimes they would get a designer on loan for a bit from somewhere else in Firefox, but never for very long. When they finally had the chance to get a designer, they knew they needed a designer who understood web development, and one who could ship code herself. After hiring a one, it has been a learning experience for all of us, as we have learned what has been successful for getting a designer into our codebase and designing with code.

We now know that Firefox thought it would be a good idea to have a designer in their codebase. But you might be asking, should we have a designer in our codebase? If this is a question you are looking to answer for your team, let’s go over the pros and lets go over the cons, and the architecture changes you need to implement for it to be a success, not only for your product, but your engineers, health of the team and the designer.

At the most basic level, having a designer is better than no designer. It is a designers job to think through visuals or user experience of an application, often both. If you want a beautiful well thought out app, a designer can help you with that process.

Secondly, having a designer in your codebase gives engineers an expert to pose questions to, specific to your app and your needs. It can be difficult for a designer to understand the problems that an engineer often needs to think about when it comes to user experience, because they are in a different head space. This is not true when they are in your codebase, it is also faster than having your engineers ask for assets or help from engineers on different teams within your company.

As designers on other teams often need time to ramp up and properly understand the problem. Having a designer in your codebase, understanding engineers problems, allows your engineers to improve the baseline of everything they produce. Even if they do not have access to fully fledged mock-ups.

Most importantly, having a designer in your codebase destroys the natural disconnect between a design program and the actual app. By running, playing with and building some of the app itself designers can give you better feedback for all of the scenarios your app will run into, not just some of them. This is called designing for real life scenarios.

The cons for bringing a designer are much more about time. The decision you make to bring on a designer into your codebase means that you will need to make changes for the designer to be successful. This means engineering time through architecture changes and mentorship. In the end you will probably find that your mileage will vary. Each team is different, each person on your team is different. The needs and resources that each team has is different.

In order to understand if good design is greater than time for your team, lets go back to the actual how of bringing a designer into your codebase. We come back to the main title: 10 ways to get designers in your Swift codebase.

Your engineers get better and better about thinking through UX problems, more intelligently and generating better looking defaults when we move beyond the constraints of a perfectly fleshed out mock-up, everyone learns, but in a learning environment, to be successful, it needs to be a calm one, a positive one. If you want to reap the benefits of having a designer in your codebase, you need to do it at a moment when you think everyone can be successful. And it is worth planning the moment out, to one where your engineers and designers will not be unduly stressed.

A poor relationship between your designers and your engineers can cause stress, every time you receive a mock-up your engineers groan that designers do not get it. Every time a designer speaks with an engineer they get annoyed because, once again, they are told that a design is impossible to build. Getting a designer into your codebase eliminates the stress. The designer becomes a member of the team. The designer learns that some of their designs are impossible to build; now they know because they have tried to build them. Having a designer in your codebase means that you no longer need to worry about wrong colors, or fonts, or other details that have been lost between the PDF of a design and the app itself. Instead you now have a person on your team who is the owner for those particular problems. Having a designer means you can stress less.

At Firefox it has been a learning experience for all of us, we believe that it is had a positive impact on our product which has made us very excited about Firefox devtools future. I can only hope that what we have learned benefits you, your team and your products in order to can make something truly beautifully designed.

Thank you very much to the conference organizers for having me, and thank you all very much for listening and your time. Please ask me your questions on Twitter.

Q: Would you consider a codebase that is not friendly for designers getting involved and being a part of it to be a code smell?

Helen: I think that code smell can definitely make a codebase very hard to get into. I know that no one likes to write code that is smelly, bad code, no one tries to write bad code. Trying to maintain good, clean code will make it easier for a designer to get into the codebase. But, because it is inevitable that sometimes you will write code that, for whatever reason, feels hackish, as long as you keep good documentation there is no reason that a designer could not operate in what is a very complex, somewhat smelly app.

Q: How do you suggest introducing a developer to Sketch, when, say from Photoshop? I get pushback when I mention Sketch.

Helen: I think that particularly if you are working on iPhone applications, the fact that all of the key commands map to storyboards is a helpful reason to do it. Another good reason is price, Photoshop costs about $600, $600 USD, and Sketch only costs 70 USD, which is a big price difference. In general it is always hard to convince people to try something new, it helps if you are just very positive and show them the cool things that you are making in Sketch. And slowly but surely win them over with cool things you have made.

Q: Do you have any idea on how to collaborate with the workers, the designers, or animation?

Q: Great talk, I can very much side with that. However, would you argue that it is better to start directly with Swift or to work with prototyping tools because many of those are more visually orientated, and they teach you logic (and stuff like that). Once a designer understands logic they can start getting into the engineering aspects. But there is, again, under the ramp up cycle. I do not know if you have had any personal experience with this?

Helen: I have used both code and I have used prototyping tools. I personally prefer just coding, because ultimately, many prototyping tools are difficult to learn anyway, and if it is going to be very hard to learn, you might as well write code. That is how I feel about it, I think that other designers will give you different answers to that. It depends from designer to designer. But I think that particularly if your app is using auto layouts, storyboards, IBDesignables, that gives visual feedback, there is enough there that a designer does not feel they have been thrown into a world of plain text, which is scary. Instead it gives some visual feedback.

Helen is a designer who figures anyone can learn to program with the right support. A big proponent of making tech a healthy community for all, she helped found Women Who Code DC’s chapter and has mentored at student hackathons all over the U.S. She is currently at Mozilla helping make devtools a little better for everyone.