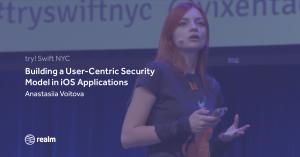 Anastasiia Voitova talks about building security that does not fail when application keys are exposed, or when servers are hacked. Security that lasts as long as unique user’s crypto keys (or passwords) are safe. Putting secrets known by the user to be a source of trust is the ultimate way for apps to become “thin” in relation to a security model, thus lowering the risks and developer pain.

In this try!Swift talk, Anastasiia discusses a thin transparent security layers system and its applicability in client-server systems; and, of course, some latest changes in ATS.

I am Anastasiia and, for the last few years, I have talked about mobile security. In this talk, we will cover a real-world application as an example, and understand its risks and threat model. We will create a security system where most control is in our hands, as mobile developers. And no server failure will introduce new risks in this model. Be brave: it is a security talk, things may get a little bit complicated.

Why should we think more about security? Our users live in a magical world, where things just happen, and they think that they are safe out-of-the-box. But remember Pegasus? Jailbreak an iPhone by just pressing a link. That is a rare build, and we can do nothing about it, but it doesn’t mean that we shouldn’t make efforts on implementing security in our apps. Because without implementing a proper security strategy, attackers won’t need Pegasus. They will grab data from our application in a much easier way.

Most users trust sensitive data to our apps, regardless of how well we protect it. It is up to us to build a good security system. But, security people tend to look at the world through the lens of security, and most security talks pay attention to some methods, assuming and seeing our mobile application as a spherical cow; and security itself as a set of rules: do X, don’t do Y, Z, etc…” That’s not exactly the case. We are not growing spherical cows, we are building real applications for real users, and that is why we need to discuss security in a proper way.

When building apps, we may start from a user problem, then move to planning the screen flow, filling this flow with features, and finally writing code. When we are talking about security, it is quite similar.

Security starts from a risks and threat model. After that, we move to secure methods and implementations, and finally choosing libraries and writing code. Note that the most popular question, “which library should I use,” is the end of the sequence. We have to think if our app is secure against a certain threat model and attacker. And from there, we derive all risks and measures.

We talked before about trust. What is a trust model? Trust model is whose secrets do you trust in your system? In our case, it is simple: everything’s broken, trust nobody, except the user.

For our real-world application, we need a real hero. Hector is our hero - he is our user. As soon as Hector installs our application, he puts some trust in our system. You may have sensitive data to protect, i.e. passwords, or private photos. Let’s imagine that Hector is a little bit of a paranoid user: he wants to protect his data; we will create application for users like him.

Our example app is a travel application. When you have a passport or insurance you usually have backups. When you are traveling somewhere, you want to store these backups in a safe way.

This is the app architecture: the user takes photos, the app sends these photos via a network to the server, and the server stores photos on some storage. Easy.

The threat model is not a very detailed one: we can imagine many possible threats: remote jailbreak, rubber-hose cryptanalysis, etc. Unfortunately, we cannot handle them all.

T1 and T4 are both about attackers who try to steal data or tamper it. You can do it easily on iPhone using applications like iPhone Bugs. On the server side, it is even easier. We should encrypt user’s data using symmetric encryption. The user has a secret, and we encrypt data using that secret. And if the user wants to decrypt data without knowing the secret, he cannot do it. Or at least he cannot do it without a trace.

Threat T2 is a passive man-in-the-middle, where the attacker collects data during transmission. It is easy to emulate using a proxy, like Charles or Burb, but it is also easy to do in the wild. As soon as we are talking transport, we mean asymmetric encryption, to ensure the identity of both parties talking. However, it is much safer to use asymmetric encryption to derive only one temporary symmetric key.

You might know the term “perfect forward secrecy,” or PFS. It means that the data is being split into sessions, and for each session, we derive a temporary key. And in case one key is leaked, you can decrypt only the data for one session; you cannot decrypt it all.

Threat T3 is an active man-in-the-middle. That is where attackers not only intercept the traffic but also redirect it and pretend to be our server. For example, we can name China with their Golden Shield Firewall, which is able to compromise SSL connection using fake SSL certificates. And again we are talking about asymmetric encryption, but this time, we are talking about asymmetric encryption with certification pinning.

On slide 42, you can see a map of all our protection methods. They are:

Let’s go back our trust model. Whom do we trust? Only the user. Going back to our app:

Please note that we only store the encrypted version.

There is one component I have not talked before on this scheme. There are cases where there is no trust between client and the server, or client and the transport, or all these things. There are methods to verify the server honestly, even if all cryptography fails.

Zero-knowledge proof is a simple mathematical protocol about comparing a pre-shared secret between two parties.The two parties never transmit this secret via network, neither the secret itself, or any hashes derived from this secret. ZKP will help us to ensure that the server actually has our data.

You can read more about ZKP in this awesome blog post, zero-knowledge proof protocol without magic.

On slide 50, you can see what our data model looks like. We have a user password, and we derive a secret key from this password using KDF. KDF is a key-to-division function, another easy mathematical function. It is a way to create a regular string to a cryptographically strong key.

We also have the photo itself, and that is sensitive data. It should be private - we will encrypt it.

We have two pieces of metadata:

These pieces of metadata are public, and we will use them for additional checks. Also both app and the server generate the key pair. Private + public keys, and remember that the application has a public server key inside.

On slide 51, you can see what our scheme looks like. The real password is only inside the user’s mind. Then we have a secret key, the sensitive data, two pieces of metadata, and the mobile key-pair and server key-pair.

Let’s see the application flow. The slides contain some pseudo-code to make it easier to understand, and I used the crypto primitives from the Themis Library.

You can use any library that you prefer; however, the only ZKP implementation I am aware of on iOS is inside the Themis library. Let’s start one-by-one.

Here are a few Swift code samples that might be helpful in understanding and implementing these security concepts.

What should you remember? Apple enforces good security practices for us, such as Apple transport security things. We need to use HTTPS almost everywhere and drop all ciphers.

There is a great blog post by Nabla explaining exactly what you need to change in your system to make it work. And all the new requirements for privacy settings, accessing the contact book, home kit, house kit, etc.

You can also check this slide from a Black Hat conference, where Ivan from Apple talked some serious security things.

Last, what I want to point out: Apple follows the same principles as our talk.

If you have any questions about building security, adding security in your applications or even what library should you use, just ping me.

Anastasiia is a software engineer working at Stanfy. She’s been building iOS applications for several years, participating in the full application lifecycle: from gathering business demands and cost estimation, through UX prototyping, to developing and long-term supporting.

She went into computer security and cryptography when she was invited to fix a few lines of code in an iOS port of a cryptographic library, and ended up taking over all of iOS development and some general mobile ideology part of the project.