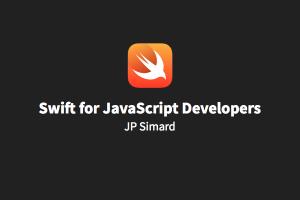 This Tuesday JP Simard gave another talk for the Swift Language User Group (#SLUG) in San Francisco. Hosted by Pubnub, this meetup was a Swift talk for JavaScript developers. JP began with a brief overview of some similarities and differences between Swift and JavaScript. He then focused on eight main concepts in the two languages, including classes, callbacks, and type safety & inference. Thanks to our sponsors - PubNub & DeNA!

At WWDC, the brand new language Swift surprised many developers with its syntactic similarities to Javascript. However, differences begin to emerge once you look past the syntax. For example, the following piece of code runs in both Swift & Javascript. However, the two languages return different things.

Syntactically, the two languages are very similar. As seen above, the same code can compile and run in both languages. As for tooling, Swift has a new feature called REPL, which stands for Read-Eval-Print-Loop (Ed.). Users can see the effects of code they write in real-time, which allows Swift to still have a scripting feel.

Swift is still a compiled language, so it compiles every single time. There are also differences in APIs, libraries, and frameworks, since those are tailored to specific platforms and applications. Type safety & generics make Swift a much safer language in that it prevents the user from passing in incorrect types. Swift also has functional concepts built into the language and the library. A final difference is that Swift will never work backend or in-browser, as there are many issues that will prevent it from being truly usable in a backend setting.

Obstacles to running Swift outside iOS/OSX (9:48)

Node.js REPL has been very useful for developers, as in troubleshooting algorithms or other ideas. Now the Swift REPL and XCode 6 Playgrounds allow iOS and Mac developers to see results in real-time without going through the time-consuming compilation step as frequently as before.

The demo was done in an XCode 6 Playground and gave a brief view of Swift syntax. Create a class with the “class” keyword and add properties. Swift is not so verbose - type inference helps with this!

Eight Concepts in Swift and Javascript (21:35)

In JavaScript, there isn’t a fully defined “class”. Instead, a “class” function can have properties.

Here, there are syntactically similar concepts between Swift & JS. This code is defining a log function that will log a string.

The Swift code is more verbose because of what’s available within the Cocoa framework & Swift standard library. Differences between Swift and JavaScript really seem to boil down to differences in their APIs.

Promises wrap callbacks in a much more reusable way.

Type safety and inference minimize the amount of mistakes in Swift code. The Swift compiler prevents code from compiling when assigning values to variables.

As in JavaScript, tuples allow users to track multiple variables that have more meaning when grouped together. Swift tuples are also strongly-typed.

Swift starts to diverge here from JS. Apple is still changing mutability in Swift - because they are still in development, features are not finalized yet. Swift defines the keyword “var” as mutable and “let” as immutable.

The two languages have different mutability semantics. In JavaScript, both keywords “var” and “let” are mutable, with “let” limiting scope, while the keyword “const” provides immutability (in only Firefox and Chrome). Another way JavaScript deals with immutability is through the freeze() method.

The Swift language seems to be designed for generics. Optional types allow a variable to have a value or no value. This is similar in JavaScript to the undefined concept. OptionalValue

There’s a lot more to Swift language that couldn’t be covered: optionals, super-enums, structs, pattern matching, and runtime. All of these concepts are powerful and very useful when needed. Ultimately, differences between Swift and JavaScript boil down to API differences, along with the fact that Swift is compiled & has type safety. Swift does take similar concepts and features from JavaScript, such as its readability, syntax, and tooling.

Q: What do you see as the future of Swift & Objective-C?
JP: I don’t see Objective-C as going away, but Apple will certainly prioritize Swift development.

Q: Are there any known performance differences? If so, how does that impact development?
JP: Swift is still work in progress, so its difficult to say if there are performance differences between Swift and Objective-C. From a design standpoint, it’s likely that Swift will be several orders of magnitude faster. It has the potential to be much faster but currently isn’t.

Q: Is Swift a subset of Objective-C? Is there anything we’ve lost in the transition?
JP: Yes, we’ve lost quite a few things, like the ability to have dynamic dispatch messaging, where we won’t know what a method will do until runtime. We must rethink things when porting to Swift. Most APIs haven’t changed, but there are a few things that are difficult to do in pure Swift.

Q: How easy is it to mix & match Objective-C and Swift?
JP: It is possible. For example, if you wanted to call Objective-C functions, methods, or classes from Swift or vice versa. The Swift IDE will auto-generate a header to bridge the two languages. It is still a work in progress so there is instability, but you can do a lot with that. Apple frameworks are still in Objective-C, so you can call most of them from Swift.

Q: Is Swift trying to encourage a culture of immutability & thread safety?
JP: Yes, almost certainly. Whenever possible, things should mostly be immutable unless necessary to be mutable. Such a culture wasn’t really possible to have in Objective-C.

Q: What’s the memory management model like in Swift?
JP: It does use ARC, Auto Reference Counting, which exists in both Swift and Objective-C. Both languages are retain-release languages, where you call retain to call ownership of an object and you call release when you are done with it. When retain is down to 0, the object can be destroyed. ARC does retain/release at compile time in Swift.