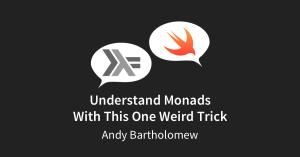 Understand Monads with this One Weird Trick

Concepts like Functors, Applicative Functors, Monads, and Monoids in Haskell all seem totally incomprehensible at first, but translating them into Swift can make things much clearer. Each of these concepts are essentially protocols that tie together Arrays, Optionals, Streams, Promises, and a host of other data types. They make way more sense when written in Swift with descriptive variable names. Understanding them can give you a deeper understanding of programming paradigms like Reactive Programming and Railroad-Oriented Programming.

The Trick is to Translate Haskell Code into Swift (1:29)

About two years ago, I was going to quit iOS development. Then Swift was announced. I used Swift to rebuild the entire app of the company I was working for at the time. When Swift first came out, I noticed articles writing about the concepts of monads and functors, and I eventually learned that they’re concepts from Haskell. Haskell is difficult to read, so I started translating code into Swift with descriptive naming for variables, and it helped me understand everything a lot better.

The first thing to understand is that Haskell has this notion of type classes, which is written in the syntax as just class. This is actually a protocol in Swift, equivalent to a protocol.

Monad (A Monad is a Monoid in the Category of Endofunctors) (5:32)

Here’s the definition of a monoid in Haskell. The m here is the concrete type that adheres to the class or implements the protocol.

The value m is the thing that implements the protocol. To translate this into Swift, we’ll use Self, which does the same thing.

The naming here is a bit obvious, but nonetheless, it’s easier to understand compared to the original version. Here, we added left, right, and list.

Note that the append function has now been renamed to concat. append is a misnomer because it suggests a mutation of an object. Here, we’re merely just taking two objects and combining them to produce a new object.

The Swift API guidelines suggests that programmers should avoid obscure terms. Moreover, it also says protocols that describes a capability should be named using the suffix ‘-able’.

Monoid is really just a protocol called “concattable” for defining how things can be concatenated with each other. For the purpose of making this more Swift-like, we can make the factory methods just an initializer, as it takes no arguments. The second function can just be an operator.

To note, operators defined in a protocol are actually static. This isn’t obvious because you don’t write static anywhere.

The interesting thing about understanding monoids, which we’re going to call concattable from now on, is that it’s more than just adding numbers. You can also concatenate two sets (a union of sets), you can concatenate two booleans, and overall make comparisons a lot more compact.

A functor just has one method requirement called fmap. Cutting to the chase, we’ll name our Swift version Mappable.

fmap works the same way as map works on arrays in Swift. Applying the same transformation from earlier, f is similar to m, which we can replace with Self, and we can also apply the naming conventions, resulting in the following:

In Haskell, functions are called without parentheses. In the original Haskell implementation, f isn’t a function. Rather, it’s a parameterized type.

Parameterized types and generics are actually type constructors. For example, you see this when you can’t simply declare things as arrays in Swift without providing a type.

I dislike T or U as parameterized types, so let’s call them InType and OutType, resulting in this:

To make it look more like the array’s map method, we have the input become the instance. This is almost exactly the same as sequence type with one big difference. The sequence type always returns an array when you map on it.

So, a functor is really just Mappable.

Here are some concrete implementations of Mappable. You may not know this, but Optional has a method called map on it, which does what I just described. This is something that you might use all the time if you’re programming in Swift, because it happens so often when you want to access a property on an optional that you have this ?. syntax. You can also view streams, an asynchronous array, and a promise as an optional. You can do this for trees, dictionaries, or other data structures.

Monads are a subtype of functor, with some extra abilities.

The arrow thing >>= is read as “bind”. It takes a wrapped value and a transform (a function that expects an unwrapped value), and somehow makes it work. In the end, you get a different wrapped value.

Because >>= is read as “bind”, we should call a monad Bindable instead. In converting this into Swift, we’ll change the return to an initializer, and we convert the bind to an OutType.

Here, you can unwrap using if let and if it’s nil, just return nil. Otherwise, call transform on the value.

With arrays, the simplest thing is to call the transform on your self, which will give you an array of arrays. Then, you can just call flatten on that, and that concatenates all of them into one array.

This is actually flatMap in the standard library. So everytime you use flatMap, you’re actually using array as if it were a monad.

A ?. syntax is actually shorthand for calling flatMap. If that property is an optional type, calling map to access the property would give you the doubly wrapped optional, but, if you’re calling flatMap, then it gives you the regular one.

Let’s call monad Flatmappable, as it’s easier to understand. It has all the requirements of Mappable: you can put values into a context, and you can also apply values to function as if they weren’t in that context, as long as they end up in the context in that function.

The important thing is to remember that you’re using monads whenever you chain optionals, and also whenever you use guard. Monads also give you ways to chain passing optional arguments to functions, but there’s no special syntax for that, which is why you’re probably using guard.

The other point of monads is to think more abstractly about container types beyond arrays and optionals, to things like promises, streams, results, and all those other possible data structures, like trees and dictionaries.

Whenever you’re really confused, break things down. Tease out the bits and pieces that you understand, and translate difficult concepts into a language you can understand.

If you name it, you can tame it. It sounds goofy, but it’s true. If you can program something, hopefully that means you understand it. Program with intention, and give revealing variable names. Programming is communication, so translate your work into a language that is easier to communicate.

Naming matters. “Monad” is an offputting, confusing word, but “flatMappable” feels like something we can all deal with.

Q: Have you seen that Chris Lattner has a working implementation of passing in a generic associated type for a type? So soon, you should be able to do what you were wanting to do with the Self OutType.

Awesome! I haven’t read that, I should definitely read that. A lot of the things that I’ve used with Swift, and wished existed, have come to exist. That has been really encouraging.

Andy Bartholomew is an iOS developer at Airbnb. He loves working with static type systems and thinking about how to make code more readable. In his spare time, he likes to read comics, cook new recipes, and play with his cat, Mei.