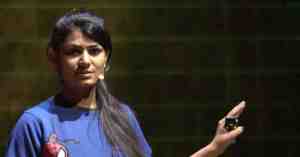 With RxJava many complex tasks can be accomplished easily and without errors. With Rxify, you just need to cast the spells and all your work will be done. From hitting the cache first, to performing retries, just cast the spells and you are good to go!

I am Garima, and I am from New Delhi, India. I’ve been an Android developer for the past four years. Currently, I’m working with Fueled, a service-based company with clients including Rite Aid Pharmacy, QuizUp, Barnes and Noble College, and Barneys New York. At Fueled, we have been working with reactive programming.

Rxify is a term that signifies the use of Java or any of its operators. RxJava is reactive extensions throughout the JVM. It is a library which works on the observer pattern. With RxJava, you do not have to worry about low-level threading, synchronization, background processing, retrying, repeating, time out, and the like.

RxJava has an observable, which produces items, and there is a subscriber that consumes the items. In an observable there are three things/actions:

In between an observable and an observer is a stream, and a stream can be manipulated by using operators.

This is the basic observable pattern.

Suppose you have a string, you can use the just operator to convert it into a stream, resulting in an observable of a string that emits a steam, which is an array. With this array, you can use the from operator or fromIterable, and it will pick each item, emitting those items one by one.

Map takes a data type or element, and it converts it into something else. Suppose there are three integers being emitted: 1, 2, and 3. And that we want the values to be multiplied by 10, resulting in 10, 20, and 30. The map operator can accomplish this.

Suppose I have the strings “Hello World”, and “How Are You?”, and that I want to have an array containing the words to be split by the space (“Hello”, “World”). FlatMap can accomplish this.

Using Filter, if you have a stream, you can filter it according to a predicate or a condition.

Suppose I want only odd numbers out of an integer stream:

The Zip operator allows you to work with more than one observable at a time. It combines multiple observables according to some function and then after combining, it emits the result of those. Suppose Hermione wants to brew a Polyjuice potion, but it requires FluxWeed from Ron, and some human hair from Harry. Both tasks, performed Ron and Harry, are executing asynchronously and simultaneously. Only after both tasks have completed can we start brewing our Polyjuice potion.

The Concat operator emits the data from two or more observables without interleaving them. Merge combines multiple observables into one by merging their emissions.

As an example, suppose a professor requested students to submit essays, the house who submits the most essays will win. And those who submitted closer to being first will get more points. The students are divided into four houses: Gryffindor, Slytherin, Hufflepuff, and Ravenclaw. These are the four observables and this is how students are turning in their essays.

Suppose Slytherin wants to get an unfair advantage, they can use concat, and all of their essays will have appeared to arrive first despite when it was actually completed.

If Herminone, who is not from Slytherin, wants to rectify this, she can use merge.

What if the frequency of the producer is producing items is more than the consumer can consume?

A way to solve this issue is by buffering. Instead of emitting one item at a time, the producer/observer can emit those in chunks. The buffer can then process the items two at a time, for example.

Debounce emits an item only when some time has passed since it last emitted something else.

A thread is a thread of execution in a program. Whenever something happens, whenever anything is running, it is a thread. For introducing multi-thread in your apps, RxJava has schedulers.

There are different types of schedulers.

Threading or a new thread is like a parallel universe. We all live in this main thread, this life that we have. If we switch to a thread, we open a portal and we go into the different thread.

Suppose Hermione wants to attend more than one class at a time. She can use subscribeOn, which allows her to “travel back in time” so that she can learn from both lectures.

The observeOn operator allows multiple thread switching. Suppose Hermione’s first lecture is on the main thread, and the second one is in the background, the following is how this can be implemented.

With the two observables, lectureOneObservable and lectureTwoObservable, we can zip the lectures that have been completed.

** When I combined merge operator with another observable that was in a flatMap, onComplete was not firing back up through the chain. Is that typical?**

It happens when you use an operator which doesn’t emit onComplete. You would have to look at the definition of those operators properly.

I haven’t used RxJava and I’m wondering if I use RxJava in Android, how much overhead does it add?

It adds as much overhead as any library call.

Next Up: RxJava #9 – Advanced RxJava Through Concrete Examples

Garima is an IIT Jodhpur (India) post-graduate (M.Tech) currently working as an Android Developer in Fueled Digital Media Ltd. She has worked with some of the top tech startups and high profile clients such as Quizup, Porsche, Venturebeats, Gilt, HBO, Chicago Bulls, Kapture, KeyMe, Ducati, Rite Aid, Afterlight and more.