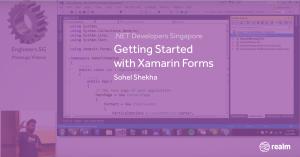 Getting Started with Xamarin Forms

The rate of growth isn’t slowing down anytime soon for mobile development, so why not learn a new way to build cross-platform mobile apps? In this talk from the .NET Developers Community Singapore meetup, Sohel drums up a simple mobile app using Xamarin that will magically work with both Android and iOS.

Fun fact: out of the 7.1 billion people in the world, 5 billion own a phone, but only 3.1 billion people use a toothbrush. For developers, this emphasizes how important is it to get into mobile development! With the majority of smartphone users on either Android or iOS, it’s great to create apps that work for both OSes.

To show how easy it is to get started, we will create a simple Xamarin app. The app won’t actually do anything, but it will consist of a couple screens: one with a username and password, and the other with a welcome page.

Get started by installing Xamarin, then open Visual Studio. If you have latest version of Visual Studio 2015, Xamarin is already integrated.

When starting a new project, you can choose between several project types: for this project, we’ll use “Cross-Platform,” which consists of both Android and iOS, and then we’ll choose to make our blank app with the Xamarin.Forms Portable template.

The basic difference between Xamarin Forms and Xamarin Android/iOS is that Xamarin Forms allows you to create one unified UI that will be used in both Android and iOS. You create the UI with the same common code, and when it’s compiled, it will be converted to its respective native UI (either Android or iOS).

This will create a few projects: Android, iOS, Windows Phone, and the common project.

In our project, we will create two screens, with the goal of learning the basics of Xamarin Forms. After setting up the login and welcome pages, I’ll also show you what controls are available in Xamarin Forms: the standard controls put out officially by Xamarin, but also the third-party tools like templates, reporting tools, charts, and other useful controls.

Check out the video tutorial above, starting at 4:00, for a full walkthrough.

Next Up: Build a Realtime Application on Xamarin

Sohel Shekha is a mobile lead, speaker, and author based in Singapore. He specializes in cryptography, security and privacy apps, Xamarin, and .NET technologies.