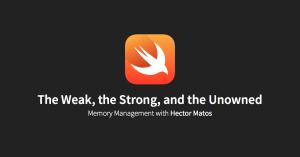 The Weak, Strong, and Unowned — Memory Management in Swift

Memory management scares most developers when it doesn’t work as expected. Apple’s Automatic Reference Counting (ARC) magically handles most memory management we used to do manually, but still often needs guidance to work well. Swift provides us with cool tools like capture lists, unowned, and weak references to do so. In this talk, Hector Matos discusses memory leaks and retain cycles — how these problem arise and how to fix them. We can then leverage Swift’s compiler magic to write clearer, more expressive, non-leaky code. Memory management issues, be gone!

Hi! I’m Hector Matos, a senior software engineer at Capital One, and I’ve been doing iOS for close to four years. I started back in manual memory management days, for all of you who fondly remember that time. I worked at a startup for about a year, then Apple for a year, followed by another startup, Monsoon, that was recently acquired by Capital One, where I work now. I worked with Swift since day one, and had the privilege of learning a lot about it when creating an entire app from the ground up with other Apple developers. You can find me on Twitter here, and I blog on KrakenDev, where I teach as much as I know about Swift.

Strong, weak, and unowned all relate to ARC - teaching it how to handle all of our memory usage cases. It’s not garbage collection, which releases objects at runtime. Instead, it generates lines of code at compile time to release points or objects.

If you were around a few years ago, this should look familiar to you:

It was terrible, and I’m glad it’s over. The last line is helpfully generated by ARC at compile time, but it gets more complex when using circular hierarchies. ARC is magical, but even magic has its limitations. When we start using fancy things like closures and blocks, ARC just doesn’t know where to stick those release messages at compile time. We have to let it know with weak and unowned, and that is why I move over to Swift and stay away from Objective-C (long live the old man).

Weak and unowned are used to solve leaked memory and retain cycles so I’ll discuss them. Here’s what a retain cycle looks like: To break the retain cycle, we use this: Human can refer to Heart as its child, and Heart can have a weak reference back up to Human. As a result, deallocating one takes the retain count down to zero. Since Heart never actually retains Human, the retain cycle is broken.

In Swift, strong reference is the default when defining properties. A regular strong property in a regular class looks like so, where a Kraken keeps track of a yummy human.

Closures also act as first-class citizens in Swift, and are reference types, acting like classes:

Think of closures as classes — they capture values inside of them. In the case of something as simple as an animation, your parent (the closure) is capturing self in order for it not to get deallocated at some point in the future. The closure is stored to be called in the future. self cannot deallocate until the closure is released because the animation has a strong reference to self. As we know, you can’t deallocate an object unless the retain count gets down to zero.

Q: If the retained self in the closure is released outside, would self deallocate after the animation closure completes?

Hector: Yes, self cannot be deallocated in this case until the animation completes. Once the animation is done, it releases its hold of self, the reference count goes down to zero, self is deallocated, the pointer to it sets to nil, and the memory is freed. However, issues arise when the animation captures self and self gets released outside, but the animation is never called, leading to self never being able to deallocate — a memory leak.

When you drag an IBOutlet to your view controller, it is automatically weak. These examples are here to show you how to create a weak reference in Swift: you use the weak specifier.

In this example, your Kraken’s face has razor sharp teeth. Say you have a Kraken API that decides to eat the yummy human. If you want to create a weak reference to self, you have it here. Since it’s weak, it’s an optional, so in order for us to make any calls on it, we can optional chain into self:

[weak self] in scared me initially, but it’s actually simple. Well, the square brackets indicate of a capture list, which is just an array, with weak self being the only object inside. Being an array, a capture list can do more than just capture weak self. You can capture as many things as you’d like:

The capture list simply tells the compiler how to capture these values. In this example, self is captured weakly, and lovedOne is unowned.

Q: It might be irrelevant, but why do you have to use self in closures?

Hector: When accessing self’s properties, capturing self is a way of Apple to force you to think about the memory management when capturing self - since it increases its retain count by one. Same goes for calling a function of or on self. The compiler forces the developer to capture self to help write better code, keeping memory management in mind.

Q: Since weak references do not increment the reference count, what prevents those weakly referred to objects from disappearing completely right away? It seems like it would start by allocating the object and immediately throwing it away.

Hector: Weak is actually very dependent on strong. The minute you try to create a weak reference to anything in your code without anything having a strong reference, it will allocate and immediately deallocate, as you said. To prevent immediate deallocation, another object needs to strongly refer to the weak object; this is the premise of weak reference, and also why it’s optional.

Unowned references are not the same as weak. Both do not increase the retain count, but unowned requires mutual dependence. weak will nullify the pointer whenever the reference is deallocated. Unowned’s Objective-C counterpart is unsafe_unretained. It will not nullify the pointer, and it does not increase the reference count. Unowned is very similar to unsafe_unretained, except it’s just a little bit safer. Behind the scenes, it has some extra checks that unsafe_unretained doesn’t. Nevertheless, since unowned references aren’t nullified by themselves, dangling pointers may result.

There are a couple of places where you would use them. Take the example of the human and the heart:

Another place you can use unowned references is with Core Foundation objects. Core Foundation objects aren’t like Cocoa objects. They kind of manage their own lifetimes. When we use them in Swift, you may need to use unowned when you’re trying to take an unretained value or something like that. I’m fairly sure that would be a good place to use it.

Q: Is there any time where the compiler will complain if you make a weak or unowned variable?

Hector: No, not that I can think of. Any reference to a reference type can be weak, strong, or unowned. These keywords do only apply to references, however, not value types since those are copied on assignment.

[Hector demos how a retain cycle is created, what it would look like in Instruments, and how to solve it using a weak reference to the delegate in a sample app. He also discusses the idea of class-only protocols that allow for weak references to delegates.]

Hector: I completely agree with you. It’s always better to code safe. This also helps avoid retain cycles when your teammate, for instance, changes the code.

Q: Do you know if Android also has potential memory issues that require the developers to be actively involved in memory management?

Hector: Yes, it does indeed have its own memory issues, and has solutions similar to weak references to address them.

Hector: Regular, non-class protocols can be used with classes, structs, and enums in Swift — reference types and value types. By limiting the protocol to only reference types, we can make references to objects that conform to it weak or strong. We couldn’t do this if the protocol was not class only because weak, strong, and unowned do not apply to value types

Raised by llamas in the great state of Texas, Hector grew to be an avid couch potato who likes spending his precious couch time playing The Legend of Zelda or yelling at the TV whilst watching Game of Thrones, and his other time with his lovely daughter and wife. When not vegging at home or blogging about Swift, you can find him sitting at the office writing mobile apps for iOS & Android for Capital One. With a particular penchant for great mobile UI/UX, Hector writes the code that makes the world go round.