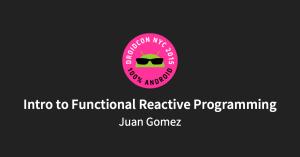 How can you move away from traditional synchronous state management with variables to asynchronous streams of data? Try functional reactive programming! In this talk from Droidcon NYC, Juan Gomez explains why you should use FRP, and covers three main topics: reactive extensions, observers & descriptions, and intermediate topics around RxJava. These powerful, yet easy to use abstractions will let you write asynchronous code in a straightforward, declarative fashion—making the task of writing great Android apps much easier.

What is functional reactive programming? (02:22)

Rx, initiated by Erik Meijer (C# and .Net, then adapted to many different languages), is a library that allows you to apply FRP to any language. Using “schedule operations”, Rx also allows you to parameterize the concurrency in asynchronous data streams (e.g. when events are going to be listened to, or emitted in different threads). In turn, that helps abstract away concepts of low-level threading, synchronization, thread safety, and concurrent data structures.

Rx has been ported to many languages: C# (original), JavaScript, RxJava (a JVM library, hence any language that runs on the JVM can take advantage of RxJava), Ruby, RxPY for Python (by Microsoft) and many more.

Writing concurrent programs is difficult. FRP helps you think about asynchronous programs (high-level abstractions), makes the flow of your application easier, and improves standard error handling (data structure = less code, less bugs). That is the reactive part. The functional part is the reactive extensions. Rx allow you to manipulate and combine streams of events. Together, that is really the power of functional reactive programming: the ability to combine functions, operate, and transform the stream of events.

When you think you really know multithreading, think of Dianne Hackborn’s quote:

“Once you think you now understand it and are an expert, you are heading soon to another painful lesson that multithreading is hard.”

The essence of functional reactive programming is the duality of our usual imperative model: we pull and process things synchronously, using iterators (e.g. getting tweets from a timeline - we are pulling iterators, processing them synchronously and then emitting a result). At the core of functional reactive programming, you take that model, and then create a push model. We have a stream of events (collection of events), we take the pull model, and we push the same things that we used to have in a collection. We push them asynchronously into an observer.

An Observable depicts a concept of duality (check Erik Meijer’s online videos for details). You can derive the Observable type (push-based method) from an Iterable (pull-model) using duality. Here, the Observable is a mirror image and the Iterable gives you the next element. On an Observable you have onNext: a new event is introduced. That one is pull: you pull the next element; the other one is push, you get the event and then you process it.

The Observable has three methods: onNext, onError, and onComplete. When the Iterable fails, you throw an exception. If we retrieve a collection, there are not many chances of failure. If you are creating the collection and it goes wrong, you throw an exception and the iterable fails. On an observable this is the onError. When something happens on the Observable, we send the error event and the observer or the processor has to stop and handle the error. On the iterable, hasNext will return folds. When the collection is over and the Observable finishes emitting events, you can process the onComplete event.

You must hook onNext, onError, and onComplete together through a subscription. On the subscription you give the observable an observer that processes events as they come.

In these lines of code—the same iteration I was doing on a collection that I had already retrieved—I am processing it here as a stream of events. I have an Observable and I am giving it an observer to a subscription . Then the observer is processing each of the tweets as they come. It is then the observer’s job to process the events as they get emitted. This is a very simple example using an iterable and an observer to process some tweets. As you can see, we have a catch at the bottom. When there is an exception JSON, we call onError to let the observer know that we are not going to be emitting events.

Uncle Bob Martin posted “Make the Magic go away”. He claims Rx is a concept that has been around for a long time—nothing new, and without value. Although I disagree with this point, I agree with the end: “any library that you use, it should not be magic to you. You need to understand how the library works to avoid issues. I am including a link from the reactive IO website if you want to learn how to build a very basic Rx framework, which will give you: A, a better understanding of reactive extensions, and B, it is going to make the magic go away.

RxJava is a JVM implementation of Rx.

This an operation on an observable (Java 7): very verbose. You can simplify the code using using Retrolambda(Gradle plugin; Java 8).

The power of Rx is that everything is a stream of events - you will need to decide how to combine operators for efficiency.

The operators on this piece of code are map, reduce and subscribe. Here we are just squaring a number, making a sum of all the squares, and printing the result. I will use “marble diagrams”.

In marble diagram you are processing some marbles. You have time, and time flows from left to right. Where you see the line on the arrow is where time stops: the stream of events gets completed. The operator (map) is in the middle. It is transforming those marbles into diamonds. In this case, this is a meta stream. There is the first stream (straight) and a diagonal stream (diamond). In this case, an observable of observables has the transform events (again, check Andre Staltz’s website to go through more interactive marble diagrams).

The observer has to implement at least a combination of the three basic methods. In this case we are not implementing onError, we are just calling onNext with two marbles and then calling onComplete (call, when the time stops). We also have “unsubscribing”. You can check for the subscription and see if you have an observer that is subscribed, and then you emit events.

Map is probably one of the best known higher-order functions on functional programming, and it allows you to transform an input, emit, transform output, and, in this case, apply it to every element.

Here we are emitting numbers and then transforming them from decimal representation to a binary representation, and printing them on the console. It is an asynchronous operation: every time I emit a number, I get it, transform it, and then emit the transformation on the result observable.

When filtering Observables, you take a stream of events and choose only the ones that you need. Here we only care about even numbers—we just pass it all numbers from zero to 10 and then it filters each even and then puts it on the resulting observable:

There are many other transforming observables, which you can check following this link.

You can sum or aggregate everything that you have on a stream of events, and then emit one single output (an observable of just one element, or the element itself). Here we are multiplying all the numbers from one to 10 and then reducing them back into just the result.

Using schedulers you can decide, on different threads, where the emitting of the events, the subscription, or the processing of the events will take place. You use observeOn and subscribeOn, and then you give it a scheduler that is the one that encapsulates the thread where you want the processing or the emitting to happen. These events happen asynchronously—you do not have to do the threading manually. Just concentrate on combining those operators and processing your stream of events.

When you have two observables emitting events of different speeds, you are going to end up with backpressure. RxJava allows you to handle that to a specific buffer, which handles a few events. If the buffer fills up, you get a backpressure error.

Android specific bindings for RxJava, RxAndroid, allow you to schedule things on a handler thread. There are two new libraries, and you can just pull the one you need. This is just sample code from RxAndroid. I am just taking a collection of Strings, and emitting them. The difference is that I am subscribing on a new thread, the normal RxJava scheduler, but I am observing on the main thread. The processing of the events needs to happen on the main thread, which you can specify it using the Android maintenance scheduler.

Juan is a Senior Software Engineer at Netflix, where he’s in charge of the design and implementation of various aspects of the company’s Android applications. He was previously an Android Engineer at Eventbrite and has been developing mobile solutions since the days of the PDA. He is an active member of both the Python and Android communities, and has previously spoken about Mobile Development topics including Android on conferences like Droidcon, AnDevCon, PyCon US, Apps World, Mobile+Web DevCon, among others.