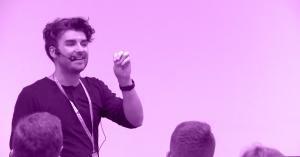 Break the Monolith with (B)Viper Modules

It’s becoming a trend that the lifespan of a mobile app be longer, and as such, good architecture is necessary because an app is increasingly difficult to build.

The motivation for speaking about VIPER is because I believe it’s one of the biggest and most structured architectures out there.

Every circle in the architecture diagram represents a different area of the software and its responsibility. The more you move inside the circle, the greater the abstraction becomes. The center has Enterprise Business Rules, which are domain entities of your business. In the airline business, an example would be availabilities.

In the app EasyJet, a user is taken from flight search to the availability screen, then to a summary of the flight they’re trying to book.

It’s important to examine the app with an eye for reusability that’s not too granular, otherwise, the libraries will be too difficult to manage.

This is related to the routing/navigation. The view model is going to tell the router to go to another module.

Take for example in the Apple weather app, where there are a list of cities, and their weather. There will be a router contract/protocol WeatherListRouter that allows the user to navigate to a detail screen.

You can also navigate to add a weather location.

In this instance, the view model is now actually a presenter that sits in the middle, and it’s the model of the view.

Who’s talking to the view?

The presenter interfaces with the view.

It tells the view to display the location list.

This next component is very important and is the interactor. If you watch the Uncle Bob video on clean architecture it actually goes exactly the opposite way around. It starts from the interactor because it is so important.

The interactor knows nothing about presentation logic. It only knows about services and entities, and applies all the application business rules to the specific module being built.

Because I don’t want to give a component a responsibility it doesn’t deserve, I want a builder that is strictly for building. This deserves to be separated because it’s the key for usability. All of those components are defined by protocols.

The builder is in charge of creating other elements and linking them together.

Nicola Zaghini is a software architect at Mobile Travel Technologies. He has been developing mobile apps since the first iOS SDK was released, from indie game development to major airlines and travel companies. Prior to that, he enjoyed Java development as professional and researcher in academia. He is currently in charge of mobile architecture in MTT and helps teams deliver amazing apps.