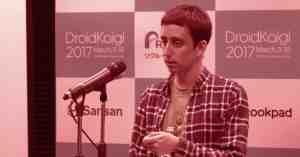 My name is Daniel, and an Android Developer at Groupon. We have a cool app, using state-of-the-art technology. If you want to work on open source, contribute to libraries, or create new ones, please talk to me or visit jobs.groupon.com/careers and see the positions we have for Android developers.

I will review Intents and Extras, do a quick introduction on how they create a navigation layer, then I will show the first model of this library, which is Dart, that is used to consume Intents.

I will also discuss Henson, the counterpart used to create intents.

If you go to Android documentation and look for an Intent, you will see it defined as an operation that you want to do, and you can specify.

With explicit Intents, you specify the component that will be used. Normally, it is in applications.

I will use the Groupon domain, so let’s say we have a list of all the deals. When a user clicks on a deal, we go to deal details, where we have all the details of that deal. To go from one to the other, we use an explicit intent, where we specify the deal details activity with the deal with ID X.

All intents together create a navigation layer that is used to navigate across our app.

How do we organize this navigation layer? With big problems, it is better to divide and conquer. I will show you two sides of the same problem and how you can use Dart to solve both of them.

To consume Intents, we use Dart.

Suppose we have an Activity that contains three fields:

This activity is triggered using an Intent which may contain extras.

For example, we have three extras that we want to map: we want to map “value 1” to field1; “value 2” to field2; and “value 3” to field3. The extras are stored in a bundle, that is a kind of map, so we have key values.

The following is how we would implement this consumption of intents in Android.

This is the deal detail activity. We have two inputs: 1) the dealId, which is a string and is mandatory, so it has to be provided; and 2) shouldShowMap, which is a boolean, and that one is optional.

It is quite a simple activity: we have two extras, but we have a lot of code, which can lead to more issues and errors.

Dart is easy to use. First, you need to declare your extras. Use the annotation InjectExtra.

In the instance in which the fields are in a model class, you can annotate the fields:

Instead of calling Dart.inject, you first specify your model, and Dart will look for the fields there:

You will not have to write any code, as it is generated at compile time.

To set it up, use Gradle:

The first one is a compile dependency, containing all the different type dependencies you will need, e.g. to call Dart.inject. The other one is provided is the processor that is used at compile time to generate all the code that will be used at runtime.

(Check the slides if you still use Maven).

First, I want to show how I usually create intents, and to let you know why we think that they are wrong.

The first approach is to use a CentralIntentFactory, which is a large class with multiple methods to create the intents to navigate throughout your app.

There are issues with this approach. Suppose you have five Activities, with three methods for each, you will have 15 methods that are calling one another.

First, the CentralIntentFactory is not following Meyer’s Open/Closed Principle, so the class is always open. The class first has many responsibilities, and you will always be modifying the class.

Also, here we have just one Activity, but we have two similar methods. It’s better to avoid this approach.

What about using factory methods inside my Activities like below?

You no longer have a big class, and you are not violating the Open/Closed Principle, but you are still writing a lot of boilerplate code.

With Henson, you can create intents without writing any code using intent builders.

Here, is a constructor where we provide the context. We create intent, and with different methods, we can add the different input before building it.

You do not need to call intent builders yourself. With Dart, you can use the Henson class.

The Henson class provides a fluent API to access intent builders. With this, you can just generate your Intents without any specifically writing any code.

Note that we have been generating code based on the InjectExtra notation. If we have an activity that does not have any extras, we will not generate any code.

For that, we have the annotation HensonNavigable - you simply specify to Henson, “when you are compiling, I want you to generate methods to be able to navigate to this activity.”

When we use Dart, the below model class is used to map the fields. If you do the same with Henson, you need to specify the class that will be used to generate this fluent API.

Henson is simple to set up for Gradle. You have two dependencies:

The first one compiles a dependency that contains the Henson class to use at runtime. The second one is the processor that is used at compile time to generate code, with your intent builders and so on.

Q: Over the last five years, the annotation processors that generate code have become very popular. It’s very common to have five of them running in your project and writing a lot of code at compile time. Do you see any problem with compile times for code generation?

Daniel: Yes, at Groupon we use many libraries, using annotation processing at compile time. We have Dart & Henson; we also have Toothpick, that I would recommend. It is an alternative to Dagger, for dependency injection. This one is completely developed inside Groupon.

We also use many other libraries, and we haven’t had an issue. Maybe each library will take one, two seconds extra at compile time. The gains you have are high, and you are avoiding writing out a lot of code, which means less effort.

Q: When you’re building an Intent with Henson, your builder methods are called extra int, extra parcelable, extra parcel, parcelable. That’s because the keys were called exactly that, right? That’s not like a generic name. In a real world example, you would say extra, or you could say like campaign ID, campaign table, campaign URL.

Daniel: Yes, exactly. I forgot to explain that. The methods are named after your extras.

Q: If you use Dart Henson, you do not have the need for the fragment arcs project anymore?

Daniel: If you are using that library just for this, you don’t need to use it anymore.