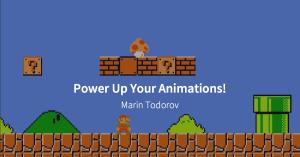 Power Up Your Animations! 💫

Everyone knows how to create simple animations, but what if you want to create awesomely fantastically beautiful animations? Marin Todorov, a team member of raywenderlich.com, shows what you can achieve if you really know your layers and animation libraries. There won’t be any magic in this presentation - just powerful, impressive animations!

Code samples from this talk can be found on GitHub.

There aren’t so many new things for animations in iOS 9. UIViewAnimationOptions is now an OptionSetType. Before, it was just values that you could combine in a bit mask. You have all the values that you had before as elements of the set, so you can combine them together and use them in this way. In iOS 8 you had to say nil if you didn’t want any options in your view animations. Now you just put square brackets to declare an empty set. In iOS 9, you can also combine options like Repeat and CurveLinear within the brackets. If you have just one option, you don’t need brackets, so that’s the weird one out. The set will actually figure out if the option is one of the elements, and then process it just fine.

The other new thing is with spring animations. In iOS 9, you can actually go one level lower and use CASpringAnimation for your layers. This class used to be in iOS, but it was a private class. It’s actually the class that has been driving your view spring animations all along. Just this year, Apple decided to give it to us all, so we can stop using open source spring animation implementations. One thing you need to know if you didn’t really use spring animations before is that you need to provide a mass, spring stiffness, and damping. The animation will then solve the system for you. Once you provide these values, you can access settlingDuration. This is a read-only property, and the animation will tell you in what time it will settle.

In iOS 7, we migrated our apps into a new visual style. But if an app has no graphical style to it that you can recognize, there’s no way of telling whether it’s by an indie developer or Apple. You can change the tint of your app with colorful text, but to actually make a big difference, you need to add some animations.

Animations make a real difference in communicating everything about your brand and style. The good thing is that everybody knows how to do some animations. With views, it’s really to just animate something as simple as moving a red square a few points to the right. If you don’t use Swift, it’s about time. The problem is that I think many people would stop at moving shapes across the screen or fading them in and out. Anytime you feel like doing something more, you just go to Stack Overflow and get a very specific answer. It works, but if you want to do something else, you need to post another question to Stack Overflow.

I think the best way to approach animations is to experiment. Core Animation, and particularly UIKit as well, provide you with so many things that you can use to create animations in your app. I think it’s really powerful, and it’s really fantastic. I’m going to show you three things that you can do. You can try different properties, experiment with new layers, and then think out of the box and do crazy stuff beyond animating with duration. For this talk, I’m going to be using EasyAnimation, which just adds a couple of features to UIKit.

I have a few examples in this demo, just to show you what Easy Animation does. I have an app that has a “plus” button, which will probably add some stuff when we tap on it. Animations in user interface are usually used to provide feedback to the user, to tell the user something is going on. So, I want to just make the button bounce using Easy Animation’s UIView.animateAndChainWithDuration. Easy Animation just adds a couple methods that really fit into what’s already provided by UIKit. This method allows you to build sequences very easily, so that you can experiment really quickly.

I’ll set a 0.25 delay and use CurveEaseOut, which slows down towards the end to build tension. My blue square is my button, so I’ll transform it and simply scale it down a bit. Easy Animation allows me to just add a dot at the end of the first animation, and then add another one. I’ll put a spring animation next, so that the button rotates a bit and scales it up.

The first thing I said to do was experiment with properties. CALayer gives us a lot of properties to experiment with, which can all be found in its documentation. Creating animations with some of them may not be obvious, like with cornerRadius, but they do pretty cool things.

So, let me animate a cornerRadius and set it to 50.0 in the second animation of the chain. For the first one I’ll put zero. Every time it will just run up and then go back to being a full square. The blob-like motion that results comes from combining these properties. There’s two reasons for that. One is that I used the spring animation in here, and the other one was that I just rounded off the corners and rotated at the same time. Just like that, we’ve built a really cool animation. We can also animate the border animation. I can give it a border and just remove it so that it looks like it takes a little bit of etching.

Let’s look at even crazier layer properties. In CAShapeLayer, lineDashPattern and lineDashPhase can let you create marching ants. When you have a selection in a photo, the selection will show up as a dashed rectangle. So, suppose in this example I have a crop tool. My selection is a CAShapeLayer, and I can add the lineDashPattern, which will let me specify how many pixels should be on and off in the dashed line. I can then animate the line using lineDashPhase, which tells CoreAnmation when to start drawing the pattern.

My second point is to experiment with layers. You have many more layers than just CALayer or CAShapeLayer, and many of them exhibit at least one new property to animate. My favorite layer is CAReplicatorLayer.

CAReplicatorLayer is basically a container layer, so when you put something in, it makes sure to create more copies of it for you. You just add it on the screen, add things to it, which just show up. In this example, I have one replicated layer that is just a dot. I can animate it so that it scales a bit.

When I see this dot, it reminds me of Siri and sine waves, so let’s try to make it look like that using CAReplicatorLayer. When you add to your replicator layer, you need to tell the replicator what to do with it. First I’ll say that I want thirty-five copies of my dot, with a time delay between them. Whatever I do to my original one, the replicator layer will do to all the rest. For example, I add a tenth of a second to the start time from copy to copy, so it builds up as each copy is delayed from the previous copy. Finally, the property instantTransform allows me to tell where the position of each copy should be. So, I’ll just say to translate by twenty points to the right, which will cause each copy to be twenty points from the previous one. Then, I can animate on the replicated layer so that the position in-between each copy is being animated.

A few friends and I were looking at the Skyscanner app, which shows you flight results. If you look for a given destination, you get a table of flights. When you click on one, it just pushes a new screen and shows you the same result on top, followed by the details of the flight. When you have multiple view controllers like that, you have to animate them on screen. What I did was sent one view to the left, and the other came from the right. The extra cool animation that I created was to take a snapshot of the select, create a new view that I used only for the transition, and add that to the screen. Skyscanner did exactly that.

After you select a flight, the row with that flight stays on screen, moves to the top, and then lets the view with the details slide in under it. Just take the cell from the table view, call snapshot view after the screen updates on it, and then get back a new UIView that is a copy. What I then did was to add it to the transition container view and manipulate it to fade out, and then kill it.

The last example I have is to tell you to experiment with everything. By everything, I mean look through some weird blogs or go to Apple’s documentation. I found this one buried really deep, so it took me a little while to put it on the actual iPhone. In this example, I have a list of posts with some photos. I created a custom view controller transition that pushes the image on screen and takes it off in a crazy manner when you tap on it.

Core Image provides you with a way to create image transitions using Core Image transition filters. Those allow you to transition one image into another one by providing a mask, so you can create custom filters of any kind by coming up with a mask. Masks can be anything black and white, and the transition will first show the black parts, followed by the grey ones, and finally the white ones. You’ll need to pull the filter all the time to take frames out of it, and then animate them on screen. You can see some of the masks I have here.