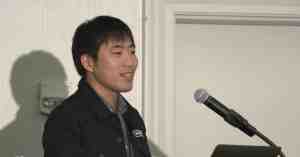 My name is Yusuke Kita, and I work at a Japanese company based in San Francisco named Mercari. Our product is marketplace applications (like eBay), and we’ve been internationalizing our app for a U.S. market.

Many apps have network communications - such as Twitter and the GitHub client. The calls to APIs usually returns with JSON from the server. Though JSON is a standard way to serialize data, I feel it’s not Swifty enough when I write Swift code.

Consider the following HTTP request when convert JSON object to data a type.

This request is to fetch user information from the server after sending a userId. The key is a string, and the ID itself is an int. Convert this to a data type, and set it to the httpBody.

With the response, convert the data type to a JSON object through URLSession.

Here, if I mistyped the ID (to a string), or had the incorrect case, it will fail. In Swift, everything is a type, and because you must use an Any to work with JSON, I believe it’s not as Swifty as it can be.

Protocol buffers, a.k.a. Protobuf, was developed by a group in 2008. Protobuf is about serialization formatting.

Reconsider the HTTP request where you convert the JSON object to a data type with Protobuf. Protobuf allows you to define your custom type.

You don’t need to write a key name with the string. Protobuf also has serialization methods, serializedData(). By calling it, it will send to httpBody.

Protobuf is more Swifty, because we have types.

How Does this Work?

You need to install the Protobuf compiler (the latest version is 3.3). You will then also need a plug-in for use with Swift that was officially released by Apple.

Protobuf supports both Objective-C and Swift; you can also use both at the same time!

There are three parts to implementing Protobuf:

Let’s take the iOSCon profile page as an example in making a .proto file. It has user ID, user name, introduction for URL, user type. Each field has a type (int, string, or enum).

We also have talk.proto file. It has ID, title, description, the user type, and also tags. This is similar, but since I used user type, I import user.proto at the top and you have to specify which version of protocol buffers itself (the latest version is free). That’s why I write proto3 on the top.

Protobuf generates all the code from .proto file.

The basic types they support are: int, Bool, String, Dictionary. It supports other languages such as: C++, JavaScript, Ruby, Rust.

These Swift features are from the official program from Apple:

Each property has default values, which means you cannot have an optional type for the property itself. If you check users name property string, you have to see also if it’s empty or not because if it’s not optional it has the empty strings as the default.

Serialization is already implemented Protobuf itself, and you can get JSON or text as a result. All you have to do is call seralizedData();

We said 300 to everybody. A is int, which will result in 8, 96, and 1. The first two digits represent a combination of field number and wire type.

Because of the binary encoding, the size would be smaller than JSON and everything is numeric. And as a result, this gives us high network performance.

Protobuf has free backward compatibility. Let’s say if the response has a non-field, it ignores it. Or if something is missing from the response, it’s going to default the value. You can easily add new properties from the server-side, or delete existing, unused property on the client-side.

You can have both JSON and Protobuf because you can look at the content type in the HTTP header. We can set the return as JSON or Protobuf.

Let’s look at the cons

Protobuf not human-readable because it’s binary data. If you want to see row value in the console, you have to deserialize it to be a custom type.

Working with Protobuf is time-consuming at the beginning because you have to know all about Protobuf, in addition to other platforms as it’s not strictly used on iOS project.

Recently, Swift announced Codable. It allows you to do type safety in terms of serializations. It’s a protocol, and you can do the same thing with Codable as you can with Protobuf. This is officially from the Swift Foundation.

Q: Can you use Protobuf with Ruby? Yusuke: Yes, Ruby’s supported.

Yusuke is an iOS developer at Mercari in San Francisco who’s been working on internationalization of the Mercari iOS app. He’s passionate about learning new technology in iOS. When not coding, you can find him cycling.