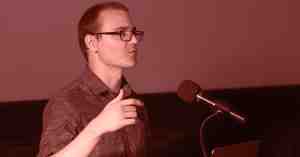 I think that developers can underestimate how awesome UIAccessibility is. The iPhone has amazing potential as an accessibility tool, and it’s used by a majority of visually impaired smartphone users. Well-designed apps really can offer meaningful improvements in peoples’ everyday lives. But mobile isn’t like other platforms where users can hack together scripts to improve the accessibility of poorly designed apps. It’s up to the application developer to provide adequate support for all users, and it’s unfortunately common to see apps where VoiceOver interaction is broken.

David Sweetman is a Lead Developer at Smashing Boxes. In 2011 when he realized he loved programming, iOS was the first platform he started hacking on, so he doesn’t notice anything particularly odd about Objective-C syntax. Before he got into programming, he provided in-home and in-office training for visually impaired computer users, and he believes accessible software is an extremely powerful tool to raise the quality of peoples’ lives.